Case Study - 'Wait But Why' : How did Tim Urban get to interview Elon Musk?

I first found out about 'Wait But Why' during a reading spree trying to learn all I could about Elon Musk. I was surprised when I found out 'Wait but Why' got to interview him AND wrote a whole ebook about it. Actually let me get that straight (for Tim Urban's benefit), Elon Musk's rep called and asked Tim if he was interested in writing about Elon Musk!

Reading the whole series of posts kept me up most of the night, but it was worth it. He explains serious topics like the 'AI Revolution' in a way that is extremely engaging and humorous. He can probably write a whole post on soil and dirt, and make it seem like the most fascinating topic in the universe.

Tim Urban's blog is a case study on the old adage:

We're going to be breaking down his post Antninja style!

We also have a commentary if you want to download it for listening on the go: 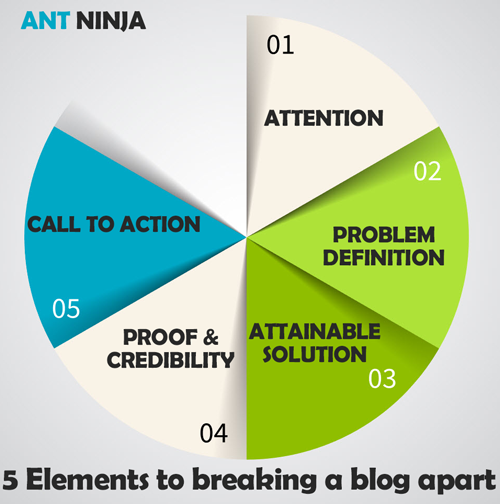 He is great at choosing interesting topics with titles that are irresistible, but not clickbaitey. Here's a sample of his top blog titles:

"Why You Should Stop Caring What Other People Think"


Not only that, he has weird artwork on his site. Professional bloggers nowadays opt for great resolution high-profile pictures. Tim Urban differentiates himself by doing the opposite, he uses diagrams of stick figures to explain his point. This works amazingly well. It's refreshing to see something so raw. 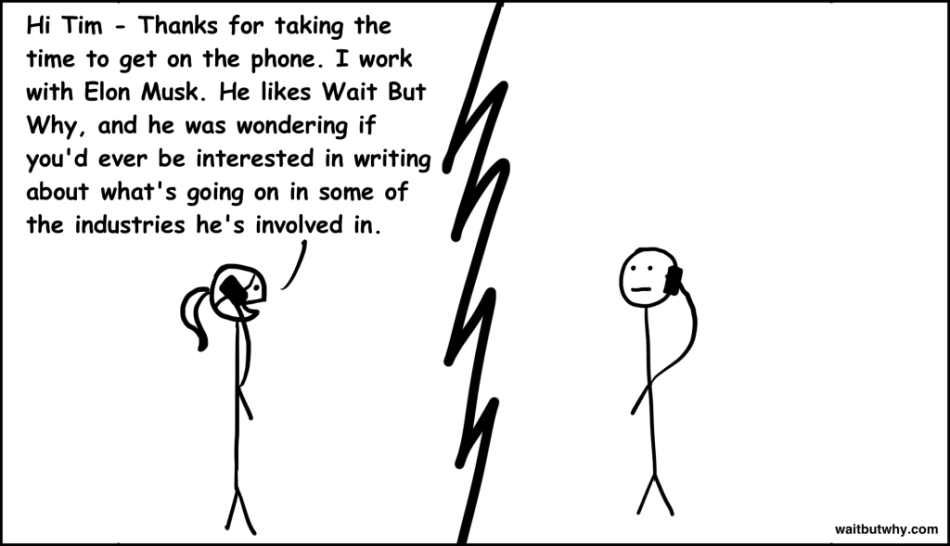 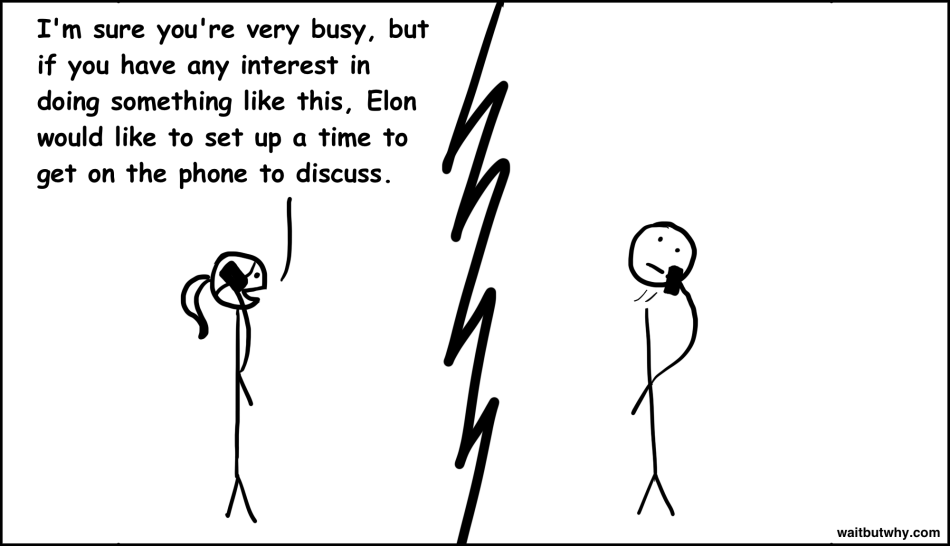 1) No matter what you're writing on, you can always make it seem interesting. Look for that interesting twist to a topic, and maximize it. Start by making the title different.
2) If everyone is using professional pictures for their blog, use crappy diagrams. Do the opposite to stand out.

What sort of problem is he solving for his readers?

This one is simple, he's writing great articles about relevant topics in a way that is interesting, personable and funny. Okay, this might sound generic, so let's take a look at a real blog post, 'The Fermi Paradox'. It's basically about 'Why can't we find other signs of life in the universe?'. You may have seen it pop up in news articles from journalists who haven't done much research on the topic and really dumb it down. Or articles written by researchers for other researchers. If you really want to get an easy to understand explanation that is not dumbed down, there aren't much choices.

Google 'The Fermi Paradox' (we did it for you). The first page has results from Wikipedia, Wait But Why, Youtube, SETI institute, University of Oregon, Scientific American, Wired magazine, Space.com, Gizmodo, Mic.com.

Just from a glance, the articles at wikipedia, University of Oregon, SETI Institute, Space.com and Scientific American seem very dry. The article at Wired is very simple and doesn't offer enough insight. The article at Mic.com seems to have copied its contents from a bunch of the articles on the front page, including Wait But Why.

So really, there's only two decent articles, Gizmodo and Wait But Why. But by far, Tim Urban's content wins. His research goes into much greater depth yet it doesn't seem over our heads.

He's actually solving a real problem here and fitting a "niche" that manages to get him over 1 million unique visitors every month, and almost 500,000 email subscribers. If you didn't know about those numbers, you'd really think this was a niche issue and there couldn't be THAT many people reading his stuff. But it turns out that, if you solve a real problem, there's plenty of people who would be grateful and interested in your solution.

How does Tim Urban solve this problem for readers?

He did an interview on Product Hunt, and I want to share some of the nuggets from it that will answer this question.

What was the biggest factor in gaining a sizable audience in the beginning?

"the standard way to get an audience is to focus in on one thing, write a lot of regular posts about it, and put a lot of thought and resources into a clever marketing / social media strategy. that works for a lot of people, but we went the opposite way, sticking with two things:

- we obsessed over quality over everything else. i wanted and still want every single thing that appears on the site to be excellent. i don't always achieve that, but that's always the goal.

- i stay true to what i would like to read if i were a reader. i tell people who email to imagine a million clones of themselves and to just write the perfect posts for those people. long articles aren't for everyone. neither is cursing. neither are silly drawings. neither is an irregular schedule or a wide range of topics. and that's fine. but i'd like a site like that, so i can feel confident that the other million people in the world who happen to be a lot like me would like that too.

we put very little energy into social media strategy. that's not necessarily good, but i think it's the right move with our amount of resources and time. it's key to make it easy for people to A) follow you and B) share your stuff, but other than that, 98% of the focus is on putting out good stuff and the rest takes care of itself. the difference between an article that's a B+ and an A+ is like a 100X difference in how big a splash it'll make once you publish it."
How do you choose topics for your blog posts?

"Every time I read about something cool or have an enlightening conversation or make an interesting observation in the subway or think of something funny about people, I take out my phone and add it to The List. The List is a huge fucking daunting list now but one thing I'll never run out of are topics.

To make a good topic, something should:

- be accessible to most people but there should be some delusion or lack of understanding in how we all think about it. I'm not an expert on the topics, so I can be useful by taking one of these topics and reading/thinking about it for 40 or 100 hours and then trying to adjust the way we all think about it or what we know about it.

- be delicious-seeming to me. I want to be excited about the topic, either cause it's interesting to me, funny to me, or meaningful to me in some way."

How do you learn more about topics for which you initially know nothing? Where do you start and how do you get a broad picture of the information so quickly?

"some posts (religion for the non-religious, how to pick a life partner, gen y, etc.) involve almost no research - just lots of pacing around thinking. others (spacex, tesla, AI, fermi, the one i just did on sound, etc.) are all about research. the awesome thing is that the internet is a godsend for a dude like me trying to learn stuff. i start by opening literally 100 or more chrome tabs with articles.

i usually start with wikipedia to get oriented, then i dig in further to a bunch of other articles and to some scholarly pdfs on the subject. when i'm exhausted i search for the topic in youtube and watch a bunch of videos there. there's usually not any one killer source - i just read a ton of stuff and pull out quotes and facts, along with my own thoughts as i go, and save them into a huge gross doc.

by the end, i am reasonably educated on the topic and i can start to sift through everything to figure out what the post should look like, what should be included, and what should be cut. then i fill in more gaps with more research as i work through that process and as i write. i often start a sentence and realize i don't understand something and i'll take a quick 4 hour research break before i come back to finish the sentence."

I can't stress this enough, content is what drove the blog to become a huge success. Like he said, the standard way people start a blog is to focus on one thing, write regular posts and have a clever marketing strategy. He threw this out the window, and just maximized one factor: content. His writing is so interesting that even Elon Musk asked to be interviewed by him.

It definitely rings a bell with Charlie Munger's insight on one factor that causes extreme success: "Extreme maximization or minimization of one or two variables."

1) Maximize or minimize one or two variables. In Tim Urban's case, he maximized content. Choose what variables you want to maximize/minimize.
2) Write stuff that YOU would actually want to read.
3) Decide what to focus on AND what to IGNORE. Choosing what to ignore is more important than you think. Tim Urban decided to ignore most of 'common sense' social media strategy, and focused on his own strategy.

He's not a scientist or academic, so why do people trust what he says about very difficult topics like AI? That's what I love about tech. You can do your own research about almost any topic you want, and be much more knowledegable than most people in a matter of days. Doing an interview with Elon Musk skyrocketed his credibility tremendously. But if we look at the posts before this interview series, he was still getting lots of hits.

It's because he puts so much thought and research into his topics, he can communicate them to people much more effectively than experts. He even adds sources to his blog posts!

Do you know of any other blogger that religiously cites the top experts in a topic for their blogs? Neither do I.

Lessons Learned:
1) Learn from the experts, and cite them to improve your credibility.

He has four very simple 'Call to Actions' and they're obvious to see from his page.

All of these items show up perpetually on the sidebar, and at the end of each post. What I like about these pictures is that they don't look sleazy. There's no 'I will help you get rich' stuff to try to convince you to sign up. He's basically saying, 'Look, I put a lot of work into this blog article to make it super interesting. If you want more of this, click one of these buttons to support me.'

That genuine way of asking for support has definitely worked in terms of email signups and shares.


If you're interested in learning more about what we've learned in looking at some of the best blogs on the internet, sign up for our 'Antninja Starter Kit' below.